Shadows. Everyone has one. The funny thing about shadows is that they don’t lurk in the dark so much as painstakingly display themselves on the brightest of days. If you want to hide it, it stands dark, following you no matter where you go.

Although we are all accustomed to seeing our physical shadows, we all have the shadows of life that follow us around. We are living in the shadow of our parents, sometime negative, sometimes positive. There are our parent’s choices haunting us and following us when we try to get a job or make friends of our own. Or maybe we are living in the shadow of a sibling. A sister or brother who always did it better than us. Someone who did well in school, or made something of themselves. But, both, can be overcome. 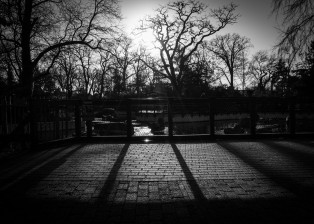 But there is one other shadow. This one goes deeper, most usually it’s a shadow that we don’t have control over allowing ourselves to feel. It’s probably the least acknowledged, the least recognized, but the most detrimental. It isn’t a person nor is it the should or could; it’s the should not. It’s the shadow of who you should not have become.

Should not is the shadow that turns into the why? And, why’s don’t always have answers, now do they?

View all posts by vanessamthibeault

Find me on Social Media